SPEED OF SERVICE UP, FRIENDLY DOWN 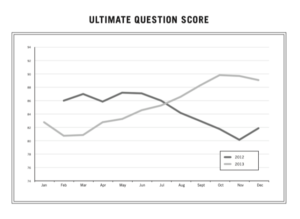 RPM Pizza (the largest US franchisee of Domino’s Pizza), which needed its day-in-the-life-of-a-Customer video to help launch its Customer service vision statement and help change the company’s culture to a world-class hospitality culture reached out to The DiJulius Group for assistance.

In 2011, RPM Pizza made major improvements in its already best-in-class speed-of-delivery service by improving its percentage of on-time pizza deliveries by 17 percent. However, according to an independent third-party mystery-shopper survey, RPM Pizza ranked last among its major competitors in hospitality. In 2012, RPM Pizza began a journey and relentlessly committed to be a world-class hospitality company. 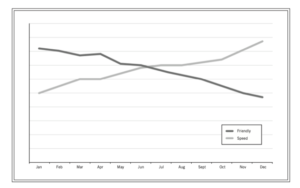 Think about the last time you ordered pizza to be delivered to your home. Why did you do that? It was critically important for RPM’s employees to truly understand the “why” piece. Were their Customers hungry? Yes, but they could get food from thousands of places to satisfy their appetite. Why pizza, and why Domino’s? This is where RPM’s video, titled Creating Smiles, played a major role. To illustrate RPM’s service vision, to really make it come to life and not just be another stale company quote, RPM’s video needed to show all the benefits of what delivering great pizza in less than thirty minutes really provides to its Customers—beyond just filling their bellies. This video showed people being in a rush, with their busy lives, some away from home traveling, others trying to get home from work and get the family fed. In certain instances, it showed people trying to please everyone’s tastes, wanting to spend more quality time with each of their loved ones instead of being in the kitchen preparing food.

It was vital that every team member understood that they were not just making and delivering pizza, but that their purpose—what their Customers truly needed from them—was easy and simple: Domino’s pizza being brought to their door, exactly how they ordered it, promptly, by someone smiling with genuine hospitality. Thus, the Customers smiled because their lives were made easier. This ensured that every RPM team member clearly knew why his or her service vision was “Creating smiles by making lives easier.” By 2013, RPM Pizza’s service culture had made a drastic turnaround. Not only was its Customer-satisfaction score significantly better than the previous year, but it also hit the highest score in RPM Pizza’s company history.