This guest article is brought to you by Kyle Maynard, speaker at the 2019 Customer Service Revolution.

I haven’t been able to keep up with replying back to all the love I’ve received yet, so I thought I’d share this video and write something I’ve been thinking a lot about lately in regards to my future goals as a way to say thank you.

The Great Big Story video is a great place to start. In my wildest dreams, I’m not sure I could have imagined the video would be shared over 138k times. I am blown away by it… and it leads me to my main point.

I want to say this both by sounding as grateful as I am for it and simultaneously by being as real as I can with you, so here goes. 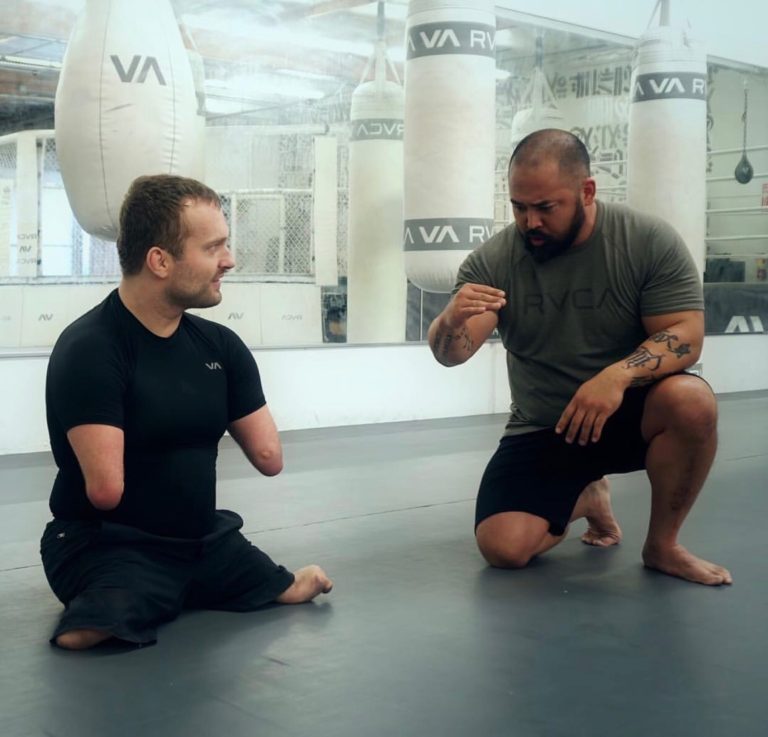 It doesn’t mean it wasn’t an amazing, even life-altering experience. It truly was. However, I get to sit and listen to different public speakers all the time, and frequently they are speaking about things that happened to them 30 or 40 years ago.

Sometimes the things that they are talking about are remarkable things. Occasionally even things that I have a hard time imagining to be possible. But it’s one of my biggest fears to fall into that trap of living the past over and over again.

I want to live for the future. I want to keep dreaming and keep striving. Now matter how old I am or what achievements or experiences have been checked off the bucket list. I want to reach for new things and learn something different because I believe life shows up differently when you do.

In the past, after a big event like when I fought in MMA or when I climbed Mount Kilimanjaro, to be honest after those goals were completed, I came home and felt this massive void. Sometimes that feeling would last for weeks until I’d snap out of it. I eventually realized I was almost being hypnotized by some false idea my ego had about what that goal was going to do for my life.

For the life of me cannot remember who I heard say this or where I read it, but I recall someone saying this at some point. “The best day of my life was realizing what it was that I wanted. And the worst day was getting it.”

Apparently, this person was experiencing something similar. The thing is, getting what you want in life doesn’t have to be different than any other day. It’s our mind that plays tricks on us and tells us the lie that everything will be different when we do. This couldn’t be further from the truth.

I believe fully in living as much as I can in the present moment. However, I also now know that a great deal of how I continually feel in the present moment will be related to what I want my future to look like. If I don’t see anything new or exciting or challenging or emotionally connected it, then it’s no wonder I’d feel bummed out.

It’s no wonder we have so many heroes in the Armed Forces struggling as they transition to the civilian world. The military is built to help people find purpose and camaraderie and a path to get where you want to go while you’re in it. On the outside, in the civilian world, the path can seem less clear.

That’s why I love the organization The Honor Foundation so much because they are showing our Special Forces soldiers the way to living a potentially amazing future.

The future is whatever we want it to be. It doesn’t matter if we are 9 years old or 90. Certain physical things will change with us as we age, but if we are committed to living a great future then our actions today will look different to make sure we are bringing that future to life.

That’s the main reason you can see me struggling and grimacing in this video. It was filmed this past Thursday with my friend Da Rulk — and I wanted to capture the spirit of his message “Always Can.”

He’s a guy who is so positive, so limitless in his mind and his commitments, and he lives his “Always Can” mentality. He pushes me and makes me want to be better just in seeing that it’s all alive in his eyes.

He even told me something about goals that I never thought about before that applies to what I’m saying here — he said the goal is that there is no goal. The goal is forward. The goal is a direction. The goal is just a simple word, “go.”

It’s not because I feel like I need to continually prove things physically, even though at one point that was the case, especially when I was young and insecure about my disability. And it’s not because I’m so much of an adventure or adrenaline junkie that always needs that next hit of adrenaline or adventure.

It’s because I’ve learned the lesson that for me to live life to the fullest today, I need to be excited about the direction I am heading tomorrow. And right now that’s exactly how I feel.

In the future I’m dreaming about today, I want to help as many others feel that same way too.